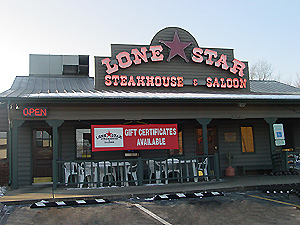 I was reading about Outback Steakhouse and their gluten-free menu the other day when my mind wandered back to my days as a stock analyst.

In particular, I was thinking about the early 1990’s when I was a restaurant analyst. There was a “steakhouse boom” where chains such as Outback, Longhorn Steakhouse, and Lone Star Steakhouse & Saloon, funded by a seemingly endless supply of money from Wall Street, were fighting fiercely to open more new restaurants than each other.

The standout was Lone Star. It was founded by a man named Jamie Coulter, who came with a reputation as a winner yet a bit of cowboy (figuratively, though maybe literally as well).

When I first met Jamie, he was explaining the concept of Lone Star to me as I had yet to visit one. As opposed to Outback’s more “traditional” casual dining restaurants (read: Applebee’s, Chili’s, etc.), a Lone Star Steakhouse was supposed to have a real Western saloon feel, right down to the loud music, the yellin’ and hollerin’, and the peanut shells strewn about the floor. Yep – free peanuts on every table with the expectation that diners would just chuck the shells on the floor. This added to the ambiance Lone Star was trying to create.

Wow, what a difference 18 years makes. Many of you are probably aware of the statistic (put out by the Centers for Disease Control and Prevention) that self-reported food allergies increased 18% from 1997 to 2007. As a result, given the profit motive of restaurateurs, I would be surprised if Lone Star still had peanut shells on the floor.

So I did a little calling around – a random sampling of some Lone Star units strewn across the U.S. Sure enough, the message was virtually the same at every unit. Peanut shells are no longer tossed on the floor. (Most units say that practice was stopped 2 or 3 years ago.) Free peanut buckets are only put on the table if requested (though sometimes the server will proactively ask if you want one) and, if so, a second bucket is also brought out for the empty shells. One unit, however, said that many patrons still toss the shells on the floor despite the extra bucket and despite the fact that it is no longer encouraged.

When I mentioned to these Lone Star hosts and managers that I had a son allergic to peanuts and I was considering bringing him to their restaurant, each had a different suggestion: they could wipe down the table very well, they could seat us away from patrons with peanuts, and other similar less-than-comforting options.

Don’t get me wrong, I don’t blame them – there’s not much they can do so long as they continue to offer peanuts to their guests. And I think that’s still too important to the image they’re trying to create. However, I have to wonder if they’ve thought about the potential profits they’re leaving on the table (see“How much are we worth? – The “Veto Vote”.)

I guess every restaurant concept has to grow up. Lone Star went from the rebellious, wild bad boy to a more mature, predictable restaurant chain. They, as with Outback and Longhorn, now also offer a gluten-free menu (which you can find on their websites or next to their listings on an AllergyEats search result).

As always, I’d love to hear your thoughts. Do you know of an existing Lone Star Steakhouse or other restaurant that still has peanut shells as part of the atmosphere? What would make you feel comfortable taking your peanut-allergic self or child to a place such as the current Lone Star? Do you think they’ll eventually decide that the sacrificed profits are too large to ignore and take peanuts out of the units altogether? Click on the Comments link below to share your opinion on these questions or anything else in this post.

And as always, please remember to use the main AllergyEats site to rate restaurants where you’ve recently eaten. The process only takes a minute and each rating makes AllergyEats a more valuable tool in helping everyone in our food allergy and intolerance community.

2 thoughts on “Peanut Shells on the Floor No More”