Friends, as many of you know, in addition to being a staunch supporter of the cause of raising celiac awareness, I’m also a children’s author.  With that, it is only fitting that I take a moment to mention Sesame Street. 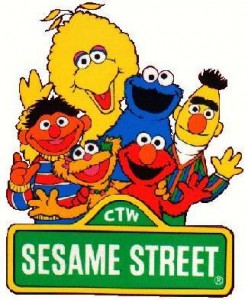 It’s hard to believe that Sesame Street has really been around for 40 years!  There aren’t very many children’s brands/themes that are able to withstand the progression of the generations, but looks like Sesame Street has indeed passed the test.

It was fitting that the highly praised Sesame Street Halloween Concert, which I had the pleasure of participating in, (see blog entry from 10/27/09) nearly coincided with this special anniversary. Better yet, I had the opportunity to announce my cause to the 2,000 people in attendance!

Enjoy your day and don’t forget to take a moment to celebrate the 40th anniversary of Sesame Street!