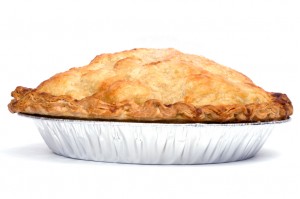 3. Add sliced peaches and toss until dry ingredients are well dispersed over the peaches. Add vanilla and toss again just to coat.

4. Roll out the pie crust into two 9 or 10-inch circles, according to instructions. Press bottom crust into pie pan.

5. Fill bottom crust with peach mixture and cover with second crust. Crimp edges together and slit top crust in several places for steam to vent.

6. Chill pie in the freezer for about 30 minutes before baking.

7. Bake pie in preheated oven for about 30 minutes or until it begins to turn golden.

8. Remove pie from oven and brush crust with maple syrup.

9. Return to oven and bake an additional 15 minutes until pie is golden.