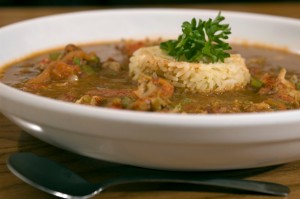 This hearty recipe was contributed by the amazing LD Sledge. It is both gluten-free and grain-free.

1. Cut up the fryer chicken and take the skin off. Wash the chicken and pat until only damp. Liberally put on the cayenne and black pepper with the seasoned salt, garlic and onion powder. Rub it in well.

2. Put a couple tbsp oil in a skillet and brown the chicken on all sides. Set the chicken aside.

3. Using the same skillet or pot where you browned the chicken, make a roux (pronounced “roo,” as in “too”). (Ask anybody from South Louisiana how to cook something and they will say, “First you make a roux.”)

a. Heat ½ c oil with ½ flour (preferably in a cast iron skillet) until it is a deep golden brown.

b. You’ll have to stir it steadily to keep it from caking up or burning.

4. Cut up your vegetables and sauté them in the roux (you may have to add a bit of oil) until they are softened. (They say melt the onions.) Do this for two to three minutes, but I usually take longer until they are no longer crisp.

5. Add the sausage to the roux and veggies and heat for another 5 mins or so. (In my last batch, I only had a pound of sausage, but I could’ve used some more.)

7. I have a huge cast iron pot. I transfer the roux, veggies and sausage to the pot. (Try not to use an aluminum pot unless absolutely necessary.)

8. Add 3 quarts of water, and then add the chicken.

9. Bring to a boil and then set to simmer.

10. Put some oil in a skillet and dump the okra in, and cook it until all the slime is gone. Try to cook until it is almost dry if you can without burning it. You need to constantly turn it to get most of the liquid out. Some people object to the slimy effect if you put it in the gumbo without cooking it like this first.

13. Simmer for a couple of hours. Some cook it for less time. I like to cook it down a bit until it’s soupy and thickened a bit and the chicken and sausage are well done. The chicken will usually become shredded and end up scattered throughout. I sometimes take the chicken out halfway through and remove the bones. This will give a good distribution of chicken.

14. Taste as you go, keeping an eye on the gumbo as it cooks and see if it needs salt or anything else. I like it hot and add Cajun seasoning like Tony’s or Cajun’s Choice or some other that gives a little heat and flavor.

15. Serve over grain-free zucchini noodles. I usually top it off with a bit of Tabasco or hot sauce to make sure it’s hot enough for me.

Note: Gumbo can be frozen, and it tastes even better after kind of marrying up with itself for a time in the fridge.