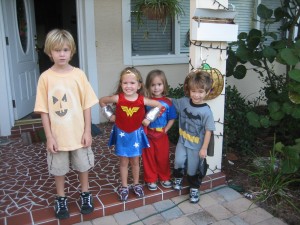 In addition to sharing the story of the Fowler family and their journey through all things gluten-free and celiac, I’d like to also announce that all 4 children including Tyler (7 yrs), Parker, Isabell and Peyton (4 yr old triplets), pictured above in their Halloween costumes, were the winners of the October Danny the Dragon contest as part of the Danny the Dragon Gluten-Free “Halloween” cupcake party which I hosted in Florida.

Our Celiac Disease Journey started in May of 2007, the triplets were about to turn two and I was questioning the doctor about their small stature. Like most, the belief was that there were 3 of them, so it might just be their size, but at their two year check up we would run more tests if they had not gained any weight.  No surprise, their two year check up came and the girls had failed to put on ANY weight in the 6 month period prior to their checkup.

At that point, we decided to see the Pediatric GI here in St. Pete, FL who immediately thought Celiac or Cystic Fibrosis. He was pretty optimistic and we were sent home wishing for an auto immune disease.  Being a mom with Rheumatoid Arthritis, Auto-immune hepatitis and Thyroid Disease (all auto immune diseases), I only began to worry about what the girls health would look like in the future. Not a promising outlook but the Celiac diagnosis was manageable and that is what we were hoping for.

Halloween 2007 we spent the majority of the day screening at All Childrens Hospital for Celiac and Cycstic Fibrosis. The girls were poked, and encouraged to sweat for their tests, so we walked the halls of All Childrens prompting them with Candy corn.

Long story short, the results were Celiac Disease and after their biopsy’s we learned their small intestines had been effected and they were no longer absorbing the nutrients they needed to grow.  AHHHHHHHHHHH at last a diagnosis, now to change the diet.

My husband and I left the hospital that day and went straight to the health food store in St. Pete and began our Gluten Free lifestyle.  We also have a 7 yr old soon (5 at time of diagnosis) and another son (the 3rd triplet), both who do not have Celiac, so we knew we were in for a big change.

The transition went better than expected and within 6 months the girls blood levels had balanced off and were within normal range.  We finally saw the weight gain, and they were beginning to look like big kids, instead of a year or two younger than they actually were.

The girls are now getting close to being on the growth charts, and are showing signs of growth all around. We still hear that they are small because they were multiples but at least now we know it is not their diets causing it. Overall you can see they are eating more of what they like and just feeling better.

It is a big adjustment to make, but it is manageable and with the right attitude and support you can fine tune the diet so that no child is left out or feels “different” because of what they eat. My girls are sure to ask at every outing, “is it gluten free?”, and that alone puts a smile on my face.  Ms. Fowler