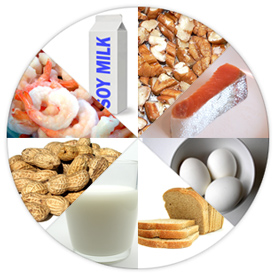 Generally, I use the AllergyEats Blog solely to talk about food allergy and intolerance issues related to restaurants. However, the issue I bring up today is relevant in that it calls into question the prevalence of food allergies, which can have a direct effect on how seriously your waiter takes you the next time you dine out.

Last Monday, the New York Times (and others) reported on a study published in the Journal of the American Medical Association (JAMA) which had as one of its conclusions that the number of people who have food allergies is much less than the population of individuals who believe they do. The major claim of the Times article is that food allergies affect 5-8% of Americans versus the 30% who believe they are affected. (Note, however, that the study itself never mentioned this 30% claim.)

This point regarding a 5-8% prevalence of food allergies is relatively accurate according to “conventional industry wisdom” (and confirmed by the Food Allergy Initiative and the Food Allergy & Anaphylaxis Network in a response statement). However, who has ever claimed that 30% of the population had a food allergy? Who would believe this? I’ve never heard that statistic. And again, the study itself never mentioned it.

However, by using that figure, the Times was able to put a sensationalistic title on the article: “Doubt Is Cast on Many Reports of Food Allergies.” (Compare this with the study’s title, “Diagnosing and Managing Common Food Allergies: A Systematic Review”.) This title, not the article, is the problem. It is misleading, deliberately overdramatic, and very concerning. Why concerning? Reading the title alone will further fuel the fire within those who do not want to believe that food allergies are a real and serious issue in our society today.

Don’t believe me? Read the 242 responses posted on the New York Times website (actually, I saved you the trouble). They range from the “I told you so” deniers, to the closet scientists, to the fact clarifiers, and to those I believe may cancel their Times subscription over this article.

Want to see your blood pressure go up? Read this first set of comments.

• I think most of these afflictions are psychosomatic, a reaction to all sorts of anxieties.
• I strongly suspect that a large number of mothers are imposing an allergy diagnosis on their children because it is (was?) the latest “fashion.” Who wants their kid to be “left out” when all of the other kids are participating?
• Half of these “allergies” are made up by people who want some sympathy. And to you overbearing parents that scream when your child sits next to their friend who is eating a PBJ sandwich at school… shame on you. If you’re allergic, you’re allergic, but please spare the rest of us.
• Some people clearly, clearly have a need to show how special they are by what they can or cannot eat!
• I have long thought that most food allergies were false. I blame it on a combination of things: it’s “trendy” to have food allergies, it will get you special consideration, empathy, special foods, and attention; and also it’s a great money-making scheme for naturopaths and other non-science-based “health” practitioners.
• My fellow waiters and I would pour beers down our throats after our grinding twelve hour days and exchange “most ridiculous allergy of the day” stories – the most freakish allergy would earn a free drink.

Of course, there were some equally passionate reactionary comments to the deniers.

• If you do not have a child with food allergies, or if you, yourself, do not have food allergies, then be quiet!!!
• What’s your point, really? Just because someone isn’t ‘allergic’ to a food they need to quit whining about their pains and symptoms and eat it anyway? Should I tell my four year old to suck it up and eat his corn even if it does give him horrible migraines, “because it’s just a simple intolerance and not a REAL allergy?” This ticks me off because so many people are very callous towards us who have food sensitivities. They act like we’re just trying to cause problems. We’re just trying to avoid pain.

Here are what I consider some of the practical comments.

• I have celiac disease. Yes it’s an intolerance not an allergy. It’s also a disease. Eating gluten doesn’t just make me feel ‘uncomfortable,’ it destroys my digestive system. Calling it an allergy is a quick and easy way to get the unenlightened to take my condition seriously.
• It shouldn’t be surprising that people resort to saying “I’m allergic” about foods they’ve learned to avoid. It’s less likely to invite further questions and doesn’t require listing unpleasant symptoms.
• Articles like this downplay the seriousness of this increasingly common condition – and makes those lucky enough to NOT have allergies more callous to our plight.
• People with complex self-directed dieting regimes that they call allergies to get concessions at restaurants are muddying things for people like me who could actually die. Please stop doing that!
• Unfortunately, this article will be used against parents trying to keep certain foods away from their children in school cafeterias.

I think the following comments can help clarify the study and the article.

• True, many people with intense food sensitivities aren’t technically allergic to a food. BUT, sufferers from food sensitivities don’t have to have a severe anaphylactic reaction to know that particular foods give them blinding headaches, body pain, digestive pain, joint pain, exhaustion, etc.
• Does it matter if it’s an allergy or an intolerance? At the doctor’s office, YES, it matters, because the diagnosis may affect treatment. But out in the world, the only word people understand is “allergy.” Therefore, at the doctor’s office, two members of my family have “milk protein intolerance.” On school forms and social situations, though, they have “milk allergy.”
• The term “food intolerance” does not hold the same level of familiarity in everyday language, so it is probably more common for people to use “allergy” to explain their symptoms.
• The title of this report is very unfortunate. Given that the population of the United States is in excess of 300 million, the percentages do tell us that tens of millions of children and adults suffer from genuine food allergy.

There were also many more comments I wasn’t comfortable reprinting!

The bottom line to me is that the New York Times did a disservice to our food allergy and intolerance community by taking a valuable government-commissioned study and sensationalizing it to attract more attention… and so it did, judging by many of the derisive comments of the online readers. It will obviously continue to be incumbent upon us as a community to educate others and to remain vigilant for ourselves.

Meanwhile, I would encourage those who want to learn more about food allergy research to simply read the study themselves. It is actually a relatively interesting read, if you don’t mind scientific study literature (and I would warn that most concl
usions can be summed up as “We don’t know.”) It can be purchased for $15 from the JAMA website (click here to view the online Abstract). And no, I do not have a financial incentive to get you to buy the article!

As always, please remember to use the main AllergyEats site to rate your restaurant experiences. Hopefully, AllergyEats will not only prove to be a valuable tool in helping our community find more comfortable places to dine, but also to give incentive to restaurants to take food allergies and intolerances more seriously.

Read Paul’s previous article entitled “How much are we worth? – The “Veto Vote”.