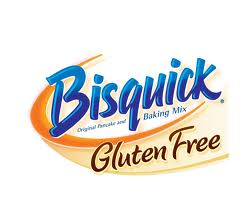 If you’ve been diagnosed with celiac disease, you’ve probably had to give up some of your favorite foods in order to manage a gluten-free diet, including Bisquick ® pancake mix, which has been an American staple since the product arrived on grocery store shelves in 1931. Luckily for the gluten-free community, General Mills has now made a gluten-free Bisquick ® mix available to the public, as well as three flavors of Gluten-Free Hamburger Helper ®, another popular American food item.

As an author, researcher, and gluten-free advocate, I’m always on the lookout for gluten-free versions of my favorite foods, taste-testing and reviewing a variety of alternatives to American essentials like cereals, baked goods, soups, and breads–items which fill the pantry of the average family. In my work, I’ve sampled numerous gluten-free mixes in a quest for an alternative to the Bisquick ® mix of my youth, but now General Mills has stepped up to the plate by offering their own gluten-free mix.

Additionally, General Mills now offers the quick and easy-to-prepare Hamburger Helper in three gluten-free flavors, Chicken Fried Rice, Cheesy Hashbrowns, and Beef Fried Rice. General Mills is in such a way continuing to demonstrate its commitment to meeting the needs of the gluten-free community, having already offered a fantastic variety of gluten-free products by Yoplait ®, Betty Crocker ®, Chex ®, Green Giant ®, and Progresso ® soup. In the past, living gluten-free required expensive trips to specialty shops and health food store or costly online ordering. Now, you can largely manage your gluten-free diet in your everyday grocery shopping at run-of-the-mill supermarkets.

An estimated 300 million Americans suffer from celiac disease, an autoimmune disorder involving a reaction to gluten, a protein found in wheat, rye, and barley, leading to a variety of physical and mental symptoms, some of which are quite severe. The disease affects more than twice as many of the number of people who suffer from Crohn’s disease, ulceric colitis, and cystic fibrosis combined, but it’s actually the only autoimmune disease not supported in its research by government funding. As a result, millions of Americans are suffering from a disease they don’t even know they have and their doctors don’t even know to test for.

Gluten-free Bisquick ® mix is surely to be well-received by the gluten-free community, who can avail themselves of the product by using it not only for pancakes but a number of other recipes, such as pies, scones, cakes, and biscuits. Recipe ideas are given at the company’s website, http://bisquick.com, as well as on https://glutenfreehelp.info/recipes.