As if women don’t have to go through enough as it is, then they hit that later stage of life of menopause and think “ why oh why?!” Menopause is a subject many are having to face and not enough people talk about openly. Carrie Pierce and Gail Edgell are two women that decided to take a stand on menopause and create a place for all women to speak freely and help each other so that menopause doesn’t have to be an issue. With their site Menopauserus.com and their weekly Thursday hosting of the Blog Talk Radio show “Magnificent Menopause and Beyond” they are helping women all over as they go through this important stage in their life.

Having gone through her own changes, Tina Turbin had insight into this important subject and it’s relation to celiac disease and gluten. She had a great time joining Gail and Carrie on the show. Needless to say, these three ladies had a blast and Tina was asked to come back on to co-host 3 more times! One thing they didn’t know was that Tina going on this show would change Carrie’s life for the better. 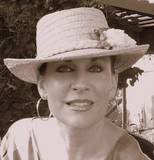 For as long as I can remember, I have suffered with Celiac Disease, and I do mean SUFFERED…

I was born sickly and displayed all the symptoms of CD from Day One, yet they weren’t recognized until I was a teenager because at the time no one knew of CD, or believed in its existence. Even members of my own family refused to believe in the diagnosis once it was achieved and by then, much damage had been done and I had endured physical, emotional and mental agony for years.

Starting at age 11, I began the ‘gluten free’ diet that is routinely prescribed. Although it provided some relief I continued to have to ‘beat’ myself through life- for over 30 years, never feeling good, never achieving optimal health, and never having much, if any, physical reserves from which to draw.

Despite the diet, I never got past the disease and the horrific symptoms, for the most, part continued.

I accomplished a lot of my goals in life, pursued and captured a lot of dreams- but doing so took everything I had. I suffered with chronic anemia, fatigue, joint pains, depression, horrible anxiety and hypothyroidism.

It was in large part because of my own ailments that I focused most of my time and attention on learning about health and nutrition, and doing everything I could to assist others in obtaining optimum health, because I knew firsthand what a blessing, and what an Essential, good health is.

During this time, as I entered peri menopause, I began to focus my attention on the vast numbers of women suffering in silence as they made their way through their own Menopause process and I began to learn about undiagnosed CD and Non Responsive CD, and the roles both play in early onset Menopause and the worsening of Menopause symptoms.

Through my work, I founded Menopauserus.com, where I serve as President today, and went on to co host (with Gail Edgell) the weekly radio show, ‘Magnificent Menopause and Beyond’ on Blog Talk Radio. We’ve been broadcasting now for 2 years.   http://www.blogtalkradio.com/magnificentmenopause

Last year, Gail and I were blessed to host Tina Turbin four separate times on our show- and she changed my life during her appearances! Through Tina’s generous sharing of her skill and knowledge, I learned I was a Non Responsive Celiac sufferer and I also learned that the so-called Gluten-free diet is anything BUT!

With Tina’s loving guidance, I cleaned up my diet; eliminating supposedly gluten free grains such as rice, quinoah and corn and I also eliminated potatoes and beans, choosing instead the Paleo way of eating: fresh fruit and vegetables, low carbs from yams, winter squash, etc. and quality sources of protein and good fats.

Over the course of the past year, my health has blossomed and most of the symptoms I’ve lived with for 46 years have stopped. My energy is good, my thyroid condition is now correcting itself- without meds- and I am thriving.

I bless the day Tina Turbin agreed to come on our show and I cherish the friendship that has developed between us. I shudder to think of where I would be today had Tina not crossed my path.

Tina is THE authority on ALL things Celiac and her level of knowledge is unsurpassed. She not only loves the work she does to help CD sufferers- she LIVES it, and that makes all the difference!

I can’t say enough about Tina’s professionalism and dedication. If you’re suffering with CD, know someone who is, or think you might be, RUN to Tina for help TODAY. You will never regret it!

If you have missed out on Tina’s appearances on the wonderful Magnificent Menopause and Beyond show here are the links to the recordings: