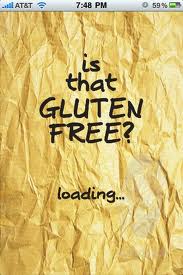 As a writer, researcher, and gluten-free advocate, I’m always on the lookout for ways to help manage a gluten-free diet. As awareness about gluten intolerance increases in the United States, I’m finding that more and more restaurants and companies are committing themselves to serving the gluten-free community. One such company, Midlife Crisis Apps, stands out for their inventive and truly groundbreaking product, an application for the iPhone called, Is That Gluten Free?

Although there are people who adhere to a gluten-free diet who don’t suffer from gluten sensitivities, many of us are either gluten-intolerant or celiac, meaning that even the smallest exposure to gluten can make us quite ill. An estimated 300 million Americans suffer from celiac disease, an autoimmune disorder caused by an allergic reaction to gluten, a protein found in wheat, rye, and barley, leading to a variety of physical and mental symptoms, some of which are quite severe and can even leave to fatal complications. This means that it’s imperative that celiacs like myself cut gluten completely out of our diets.

The basic and most critical question for a gluten-free dieter then is, “Is that gluten-free?” Learning which foods have gluten and which don’t can be quite a headache, especially because while a particular food item produced by one company may not have gluten, the same item manufactured by another company may contain it. This leaves us with the necessity of reading labels and calling food companies up to ask them directly about gluten content, a long and inconvenient process to say the least.

Now Midlife Crisis Apps has created a monumental achievement for the gluten-free community, an iPhone application called Is That Gluten Free? Its features include information on over 14,800 confirmed gluten-free products from over 360 brands, the ability to search by the product’s name, brand, or category, totally free frequent updates, a convenient alphabetical index, and even comments from the manufacturer regarding cross-contamination. There is no internet connection required, except for use of the website link that connects users to the company, where they can find out even more information. The app works on iPhones and iPod Touch devices with OS 3.0 installed, but not earlier versions of OS.

The app has already received acclaim by Apple in its New & Noteworthy spot, and its popularity is growing steadily. Is That Gluten Free? is now the number-two app among the Paid HealthCare and Fitness Apps, and the number-one gluten-free app in the App Store.

So how much does this highly valuable app cost? Believe it or not, you can download the app for only $5.99, which includes regular, free updates.  No wonder why the GlutenFreePost.com is recommending that celiacs should buy the $199 iPhone just to have Is That Gluten Free?

Is That Gluten Free? may have possibly revolutionized the gluten-free lifestyle, reducing hours of inconvenient research and label-reading for gluten-intolerant and celiac individuals. Visit http://midlifecrisisapps.com/is-that-gluten-free-eating-out/ for more information and to order the app.

One thought on “iPhone App Could Revolutionize Gluten-Free Living”