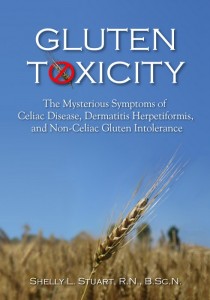 With the advent of the latest medium, the eBook, the celiac community has been able to stay informed more conveniently than ever about their disease and gluten-free living. A handful of eBooks have caught my attention, some of which I’ve mentioned on my Gluten Free Help Blog at GlutenFreeHelp.info, but one particular eBook stands out for its thoroughness, scope, and clarity–Gluten Toxicity: The Mysterious Symptoms of Celiac Disease, Dermatitis Herpetaformis, and Non-Celiac Gluten Intolerance by Shelly Stuart, R.N., B.Sc.N.

Gluten Toxicity, which is also available through Amazon.com in print as well, contains 248 pages and 30 chapters of vital information for those suffering not only from celiac disease but from DH (dermatitis herpetaformis) or gluten intolerance as well. The eBook offers extensive descriptions of symptoms, breaking them down into numerous categories including neurological (brain and nerve), urological, and psychological symptoms. Diagnosis and the gluten-free diet are dealt with in extensive detail.

What sets the book apart from others is an assortment of topics that Shelly takes up in the latter part of the book. Some chapter titles awaiting the reader are “Thirty Lifestyle Tips To Help Ease The Transition,” “What If The Gluten-Free Diet Doesn’t Work?”, “Could A Grain-Free, Specific Carbohydrate, Paleolithic, Or Elimination Diet Be Helpful?”, and even “Is A Gluten-Free Or A Grain-Free Diet Healthier For Dogs And Cats?” Stuart even shares a dozen theories of why the prevalence of celiac disease has increased and shares a list of  Global GF Bloggers, listing my website, https://glutenfreehelp.info, under this category. In the end, Gluten Toxicity answers nearly every question one could have about gluten issues; whether one is suspecting gluten toxicity may be the culprit behind unwanted physical or mental symptoms, is in the middle of or has just been diagnosed, or is in the treatment phase, one should be able to find helpful information pertinent to one’s situation in Stuart’s eBook.

Stuart suffered the effects of gluten toxicity for many years before she was finally diagnosed with celiac disease. After her diagnosis, she had her relatives screened, and her mother and one of her three daughters were also diagnosed celiac. Her mission now is to increase celiac awareness and has written Gluten Toxicity as part of this mission.

The very format of Gluten Toxicity—the cutting-edge and convenient eBook—may very well prove especially advantageous for Stuart’s undertaking, as it allows for people to transmit the information rapidly and widely by passing the book on easily to others, for example by email. Gluten Toxicity is one of many eBooks to have been released on the subject. Other books include Gluten Free Lifestyle Baking by Katie Ross, Celiac for Dummies, and What On Earth is Celiac? by Diane Jacobs. Gluten free eCookbooks can be convenient for gluten-free cooks, who can print one recipe at a time for their use in the kitchen instead of dealing with a bulky print cookbook. Other conveniences of eBooks include the ability to read the book anywhere one wants and to store it on one’s computer, saving shelf space. I suspect many eBooks on the subject of gluten-free living and celiac disease will follow Stuart’s Gluten Toxicity, ultimately resulting in the author’s objective of increasing the diagnosis rate in North America.